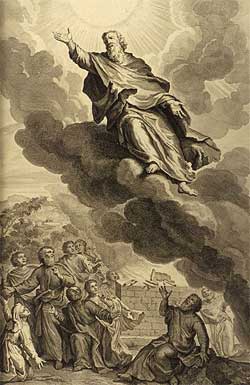 The Book of Enoch and the Pseudepigrapha

Brief introduction to ancient texts not found in the Bible like the Book of Enoch.

Jewish Traditions Not Included In the Bible

The Pseudepigrapha is a collection of various works written approximately between 200 BCE and 100 CE that were left out of the Old Testament. They tend to be written in Hebrew or Aramaic or occasionally Greek, and tend to be attributed to well known biblical heroes like Abraham, Moses, and Noah. Some of these books were included in Greek manuscripts of the bible, and those extra books became known as the Apocrypha and are still included in Catholic bibles.

Note, in ancient times, they were not distributed together as one collection called the Pseudepigrapha. That’s just a term that scholars use today to classify this body of literature. Also note that while Catholics hold the Apocrypha to be part of the canonical scriptures, Jews give them a similar weight/influence as other non-canonical texts in the Pseudepigrapha like the Book of Enoch – ie very little other than legends. This is because the stories often deviate from the mainstream beliefs of the various prominent Jewish sects of the time.

Originally written in Hebrew or Aramaic (which we have from the Dead Sea Scrolls), this book describes the revelations of Enoch, who according to Genesis lived 365 years and then ‘walked with God and was not, for God took him.’ (Gen 5:18-24) The text itself, is made up of several stories that seem to be put together piecemeal and jump around.

1 Enoch describes a number of issues including the fall of the watchers, the end of days, the Messiah, punishment of the wicked while the righteous will be rewarded, etc. Its main purpose for telling the story of the watchers seems to be to recount how moral evil came into the world. By engaging in the sinful/evil act of sexual relations with humans, the angels defiled their own pure nature. To make matters worse, they taught their wives forbidden secrets of beautification, war, magic, the workings of the universe, and other immoral practices. Later, Enoch becomes the intermediary between the captured Azazel, who will now never know peace and must watch his children die, and God. Azazel asks Enoch to read a petition for forgiveness, but God refuses due to the magnitude of the crime they committed. Interestingly, the story also mentions how when the giants were slaughtered, evil spirits emerged from their bodies and were condemned to roam about until the final judgment.

This now accounts for how we have evil in the world. While the fallen angels were punished, the giants were slaughtered and mankind was wiped out with Noah’s Flood, this condemning sin did not go away because these evil spirits, who were unable to be drowned or killed, still roamed the earth.