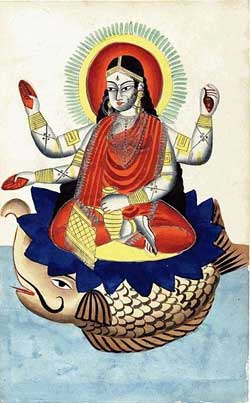 The river Ganges, referred to as Ganga, is a sacred river which according to legend, once only flowed across the heavens.

Disclaimer: In response to numerous emails, I personally wouldn’t classify Ganga as a ‘demon.’ However, demonologist Collin de Plancy, who I cover extensively on this site, did back in his day. I tried to be fair and include descriptions from the Puranas/other Hindu literature to balance what he wrote, but I can’t change the fact that he included Ganga in his list. If you’re still offended, you can read my response to angry emails I’ve received concerning this.

Descent of Ganga to Earth

According to legend, the Ganga once only flowed across the heavens. One day, an ascetic named Bhagiratha was granted a boon by Brahma for his great devotion. Bhagiratha’s lineage was plagued by death, so he asked Brahma to purify the ashes of the deceased sons of Sagara so that they might “attain to Heaven”, and also to grant him a son. Brahma agreed, but warned him to invoke Shiva first.

“Great is they aim,” replied the grandsire, “but yhou shouldst invoke Mahadeva to receive the falling Ganga, for the earth may not susstain her. None but he who sways the trident may sustain her fall.”

Bhagiratha worshipped Shiva for a year before he agreed to the task.

Then Ganga, in mighty torrent, cast herself down from Heaven on to Shiva’s gracious head, thinking in her pride: “I shall sweep away the Great God in my waters, down to the nether regions.” But when Ganga fell on Shiva’s tangled locks she might not even reach the earth, but wandered there unable to escape for many a long year.

Shiva finally let her reach earth after several years, and she filled the land with water until she reached the Ocean. Bhagiratha’s family line was then purified by her waters and “attained to Heaven”.

Another legend describes Ganga as Siva’s second wife whom he wore in his hair. Having a second wife flowing though Siva’s hair was a major point of contention for his co-wife, Parvati/Uma, and her angst shows up in a number of poems.

“Just because I allow the river of the gods, Ganga, in your tangled hair, you now have her frolicking onto your ears and soon you will even have her sitting in your lap. You cheat!” Angrily Parvati the Daughter of the mountain, accused him.- The Rebuilding of Somanatha Temple

“You hear that I’m afraid of my co-wife?
Suradhuni loves me more than you do!
From her perch in Siva’s matted hair
She sees how he holds me
In his heart.
Who else is so lucky to have such a co-wife?
– Sarat-kamal-mukhe

Ganga-Gramma is a feminine demon whom the Indians fear and thus offer great honors. He has four arms and holds a small bowl in his left hand and a three-pronged fork in his right. During processions, he was drawn on a chariot in great splendor and sometimes his fanatics would throw themselves under his wheels. Usually goats were sacrificed to him. During sickness or other dangers, he could be found among those who took an oath to him. If they recovered, they would honor Ganga-Gramma as follows.

“One sank down in a skin backed with hooks, by which means one was raised in the air; there they performed sleight-of-hand and cut capers before the spectators. When simple and credulous women, who were persuaded that this ceremony is agreeable to Ganga-Gramma and would cause them no harm, consented, then there was no time to change their minds before they were already in the air. The cries of the assistants stifled their complaints.”

Another type of penitence in honor of Ganga-Gramma involved letting a string pass through the participant’s chair. He would then dance while others pulled the string. After the ritual, a buffalo was sacrificed to him and the blood left in a vase next to Ganga-Gramma’s image. The next day, it is claimed that the blood vanished. Some say instead of a buffalo, human victims were sacrificed.