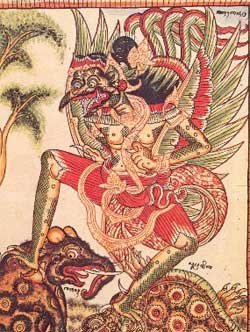 The bird, Garuda, usually serves as a mount for the God Vishnu.

Disclaimer: In response to numerous emails, I personally wouldn’t classify Garuda as a ‘demon.’ However, demonologist Collin de Plancy, who I cover extensively on this site, did back in his day. I tried to be fair and include descriptions from Hindu literature to balance what he wrote, but I can’t change the fact that he included Garuda in his list. If you’re still offended, you can read my response to angry emails I’ve received concerning this.

The bird, Garuda, was the son of Vinata and Kasyapa. As soon as the massive bird crawled from his egg, he was immediately hungry. Upon seeing his size, his mother sent him to see his father, who would feed him.

Kasyapa instructed the bird that there were a hundred thousand evil Nisadas (Aborigines) by the ocean shore. These people were like crows, a danger to the environment. However, a brahmin that lived among them in concealment. Garuda was to leave him alone.

So Garuda went to the ocean and devoured the Nisadas. In the process, he accidentally swallowed the Brahmin and could neither spit it out or swallow it. So he went back to his father and asked for help. The father spoke to the brahmin, but it was adamant that it would not leave until the Nisadas, who have always been his friends, were freed. Out of fear of brahmin-murder, Garada spit out the people and their brahmin.

After this incident, Garuda was still terribly hungry, so his father told him that somewhere in the ocean are a mighty elephant and tortoise who are trying to kill each other. They would make good food for the bird. Garuda immediately set off and found the two creatures.

But Garuda soon found that no mountain or tree would hold himself and his two creatures of prey so he flew two hundred thousand leagues with the speed of a gale and finally perched on a huge rose-apple tree. The branch immediately snapped, but Garuda was able to catch it before it killed any cows or brahmin.

Vishnu Hari (Vishnu in human form) was watching from below and asked the bird what it was doing. Garuda explained the situation and Hari offered his arm to sit on while the bird ate. After Garuda had finished his meal, he was still hungry, so Hari offered him the flesh on his arm to eat. Garuda ate plentifully, and not a wound showed on Hari’s arm. Garuda then asked what favor he could do. Hari replied that he could be his mount for all time to come. The bird graciously accepted the offer.

Dictionnaire Infernal – Collin de Plancy (1863) (paraphrased)
Garuda is a fabulous bird often presented with the head of a handsome young man, the body of an eagle, and a white ring around the neck. He acts as a carrier for Vishnu similar to the eagle Jupiter used. Garuda was hatched from an egg from his mother, Diti, and has laid and brooded for 5 years.