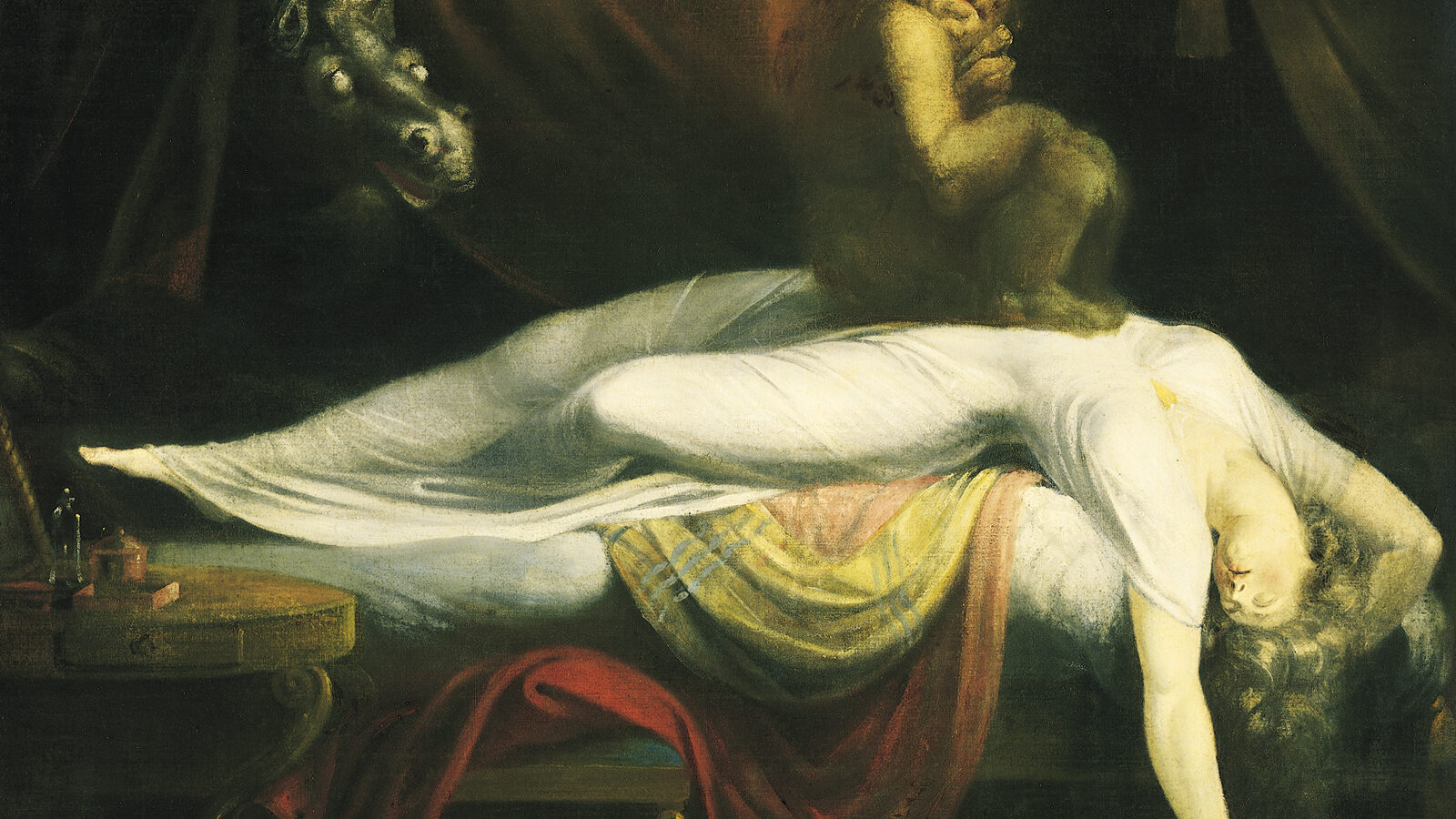 Sleep Paralysis: Demon Encounters and Terror in the Night

If you've ever woken up but felt paralyzed - or perhaps you've seen things, heard voices, or felt an evil presence. Relax - it's probably just sleep paralysis.

On the message board, we get numerous stories of people that wake up but can’t move. Often, they see things, hear voices, and/or feel an evil presence near or on top of them. And no matter how hard they try, they can’t move a muscle. Feeling trapped, they lie there hoping to survive.

This week, sciencenews.org published a story on this not so uncommon phenomenon. I don’t know how long the article will be free, so I’ll try to summarize it here.

One such encounter they describe as follows:

Exhausted from a bout of mononucleosis and studying for finals, Hufford retreated one December day to his rented, off-campus room and fell into a deep sleep. An hour later, he awoke with a start to the sound of the bedroom door creaking open- the same door he had locked and bolted before going to bed. Hufford then heard footsteps moving toward his bed and felt an evil presence. Terror gripped the young man, who couldn’t move a muscle, his eyes plastered open in fright.

Without warning, the malevolent entity, whatever it was, jumped onto Hufford’s chest. An oppressive weight compressed his rib cage. Breathing became difficult, and Hufford felt a pair of hands encircle his neck and start to squeeze. “I thought I was going to die,” he says.

If this has happened to you, no, you haven’t had a demon encounter – you’ve experienced sleep paralysis.

In fact, it used to be what people referred to when they experienced a ‘nightmare’ – ‘mare’ coming from the Anglo-Saxon merran meaning to crush. The term nightmare means the crusher who comes during the night.

Psychologist J. Allan Cheyne has done extensive research on sleep paralysis and found that many of the people who report these types of experiences are “average, emotionally stable folk.” In some of the surveys he’s done with college students and volunteers, about 30% have reported experiencing at least one incident. 1 in 50 people experience the phenomena at least once a week. So what’s going on?

Two brain systems contribute to sleep paralysis, Cheyne proposes. The most prominent one consists of inner-brain structures that monitor one’s surroundings for threats and launches responses to perceived dangers. As Cheyne sees it, REM-based activation of this system, in the absence of any real threat, triggers a sense of an ominous entity lurking nearby. Other neural areas that contribute to REM-dream imagery could draw on personal and cultural knowledge to flesh out the evil presence.

A second brain system, which includes sensory and motor parts of the brain’s outer layer, distinguishes one’s own body and self from those of other creatures. When REM activity prods this system, a person experiences sensations of floating, flying, falling, leaving one’s body, and other types of movement, Cheyne says.

Hufford, however, regards the intrusion of REM activity into awake moments as inadequate to explain sleep paralysis. Dream content during REM sleep varies greatly from one person to another, but descriptions of sleep paralysis are remarkably consistent. “I don’t have a good explanation for these experiences,” he says.

Interestingly, the article goes on to describe sleep paralysis as it relates to post-traumatic stress disorder (PTSD) in Cambodian refugees and Vietnam vets. They even say it can explain alien abduction claims. The article concludes by mentioning that most people that have had such frightening experiences rarely tell anyone and assume their incidents were real. Only after talking about them with others do they realize the experiences are common.

Kabbalistic Interpretations of God: Ein-Sof and the Sefirot
Next Post: Christian Heresies: What is Heresy?