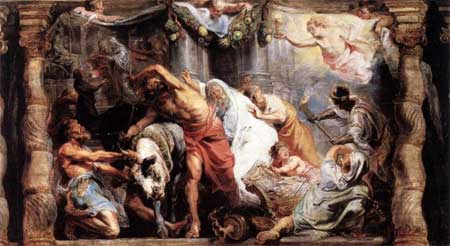 Christian Heresies: What is Heresy?

When we look back over the course of history, there are many groups that claim to have held the correct view of Christianity.

When we look back over the course of history, there are many groups that claim to have held the correct view of Christianity. Some examples include early Gnostic sects of the first few centuries, groups like the Waldensian or Cathars of the 11th-12th centuries, reformists like Martin Luther and John Calvin, and even scientific intellectuals like Copernicus. I’ll be talking more about these people in later posts, for now, I want to spend a few minutes defining “orthodoxy” and “heresy.”

Problems of Orthodoxy and Heresy

From a historical perspective, “orthodoxy” and “heresy” go hand in hand. Often, there is a series of intense debates between two or more opposing or contradictory beliefs. The winners of such debates usually find their beliefs to become the “orthodox” beliefs while the losers’ beliefs end up becoming defined by the victors as “heretical.”

If we look at the origins of the words, orthodoxy comes from the Greek meaning “right belief” while heresy literally means “a choice.” Therefore, the orthodox is the set of beliefs considered to be right, while heretics are people who actively choose to believe the wrong beliefs.

Of course, both words soon become problematic – everyone believes their beliefs are correct. If they doubted their beliefs or thought they were wrong, they’d change them. The people of history are no different from modern people – if they believe in something passionately, they’ll swear up and down that they hold the orthodox belief and their opponents are wrong.

So, historians take a different approach. They still use the terms “orthodoxy” and “heresy,” but use them without moral judgment. Orthodoxy doesn’t refer to the people that were doctrinally and spiritually correct. Instead, the term “orthodoxy” refers to the doctrines and beliefs that eventually became official dogma. On the other hand, heresy does not refer to the people who were doctrinally and spiritually incorrect – those who actively chose to believe the wrong beliefs. Instead, historians use heresy to refer to the doctrines and beliefs that didn’t make it into official dogma.

Again, I stress, there’s no sense of “right” and “wrong” here – when you’re looking at writings and texts from a historical perspective, you can’t know which belief is the “right” or “wrong” belief. Sure, of course, you’ll have your opinions, but there’s no way to prove one side was clearly right while the other side was clearly wrong.

This is an important distinction when we start looking at early groups that sprang up during Christianity’s formative years. We know of numerous movements, all calling themselves Christians and claiming to know divine truths, dating from the 1st-4th centuries. For some of these movements, we have primary sources – writings penned by these groups about their beliefs. For others, we have numerous writings by the early Church Fathers – a group of spokespeople whose beliefs eventually became the official dogma of the Church in the 4th century – that passionately refute these groups.

During the 4th century, the Council of Nicea came together to discuss and debate what should be the Orthodox beliefs and what books should make up the New Testament. Before this time, people didn’t have an official handbook of texts like we have the New Testament nor did they have access to all the books we know as the New Testament. In fact, many had other writings, which often claimed to have been penned by apostles and others close to Jesus, which never made it into the New Testament.

Before the 4th century, it doesn’t make sense to label Christian beliefs as orthodox or heretical, simply because at that time, people were still debating and discussing what to believe. Each group passionately felt they were Christian and had the correct Christian beliefs. However, there was no official stance on what everyone who called themselves Christian should believe, so it was impossible to point to a book or creed and say – hey, you’re wrong. Therefore, historians refer to the beliefs that would eventually become the dominant beliefs as “proto-orthodox.”

Of course, once the Church established its official dogma, heresy took on a different meaning. Now, heresy means that you hold a belief that goes against the official dogma of your own religion. For instance, during the Inquisition, Muslims and Jews couldn’t be considered Christian heretics because they weren’t claiming to be Christians. Only Christians could be considered heretics. And, the Church at this time was powerful enough to do something about those spreading heretical beliefs – after all, there’s no point in branding someone a heretic if you’re not going to try to stop those beliefs from spreading.

There are 5 main types of heretics:

Sleep Paralysis: Demon Encounters and Terror in the Night
Next Post: What Do We Know About the Historical Jesus?