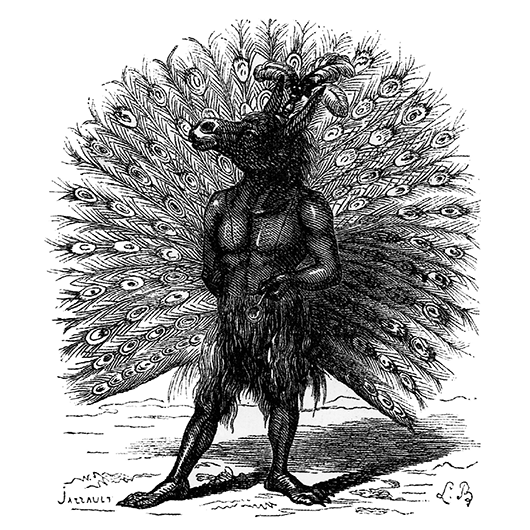 According to Collin de Plancy, Adramelech is a high chancellor of hell who tends to Satan's wardrobe. He was also the god in 2 Kings 19:36-38 to whom the Sepharvites worshiped through human sacrifice.

According to Collin de Plancy’s Dictionnaire Infernal, Adramelech is a Great Chancellor of the underworld and President of the High Council of Devils. He oversees the king of demons’ wardrobe. He was worshipped in Sepharvaim, a city of the Assyrians who burned children on his altars. The Rabbis say he shows himself with the face of a mule and sometimes as a peacock. 1Collin De Plancy, Jacques Auguste Simon. “Adramelech.” Dictionaire Infernal. Paris: Henri Plon, Imprimeur-Editeur, 1863. 8. Internet Archive. Web Jul. 22, 2017.

Gustav Davidson (1994) describes Adramelech as one of two throne angels (along with Asmadai). In demonology, Adramelech is the 8th of 10 archdemons in Beelzebub‘s Order of the Fly.2Davidson, Gustav. “Adram[m]elech[k].” A Dictionary of Angels: Including the Fallen Angels. N.p.: Simon & Schuster, 1994. 8. Print.

Adramelech in the Old Testament

The name Adramelech (also Adrammelech, Adramelek or Adar-malik) appears in the Old Testament twice, referring to two distinctly different characters. The first time, Adramelech is mentioned as a son of the Assyrian King Sennacharib who, along with Sharezer, murdered his father while he was worshiping in the temple of his idol, Nisrach (2 Kings 19:36-38 cf. Isaiah 37:37-39). However, the “demon” de Plancy is describing should not be associated with this Adramelech.

The “demon” that de Plancy describes is referenced in the second instance of Adramelech: the Sepharvite god worshiped by human sacrifice.

What Do We Know About Adramelech?

To date, no mention of the Hebrew name Adramelech has been found on Assyrian inscriptions, so scholars and bible commentators have been left to speculate. The name Adramelech is most likely a reconstruction the Western Semitic “Addir-Melek” meaning “the glorious one is king,” a fitting name for a sun deity. The link between Adramelech and Moloch comes from the practice of worshiping both deities by burning children. 4Becking, Bob, Pieter W. Van Der. Horst, and Karel Van Der. Toorn. “Adrammelech.” Dictionary of Deities and Demons in the Bible: Second Extensively Revised Edition. 2nd ed. Leiden: Brill, 1999. 10. Print.

Philip Schaff mentions both stories of Adramelech in his Dictionary of the Bible (1880). In reference to 2 Kings 17:31, Adram’melech (king of fire) is an idol-god of Sepharvaim who represents the sun while a similar idol-god, Anammelech, represents the moon. Worshippers sacrificed their children to these idols. In reference to Isaiah 37:38, Adrammelech, son of King Sennacherib, and his brother Sharezer killed their father while he was in the act of idolatry. Afterward, they fled to Armenia and Esar-baddon was crowned King. Schaff depicts him with a lion’s body, a beard and wings.6Schaff, Philip. “Adram’melech” Dictionary of the Bible. Philadelphia : American Sunday School Union, 1880. 26. Internet Archive. Web. 22 Jul. 2017.

What Do We Know About Sepharvaim & Its Deities?

Not much is known about the city of Sepharvaim, its people or its deities. To date, theologians, Biblical scholars and Near Eastern archaeologists have proposed a number of places where Sepharvaim may have been.7”Sepharvaim.” Net Bible. Web. Jul. 22, 2017.

Both the modern-day Dictionary of Deities and Demons in the Bible and Mesopotamia and the Bible consider the latter to be the most likely based on name/language analysis comparing linguistic roots with names of kings and deities found on archaeological artifacts; but there’s no conclusive archaeological evidence of Sepharvaim’s exact location, nor which deities its people may have worshiped.

Adramelech is briefly mentioned as an angelic being defeated and vanquished from Heaven by archangels Uriel and Raphael in Milton’s Paradise Lost.

Uriel and Raphael his vaunting foe,
Though huge and in a rock of diamond armed,
Vanquished-Adramelech and Asmadai,
Two potent Thrones, that to be less than Gods
Disdained, but meaner thoughts learned in their flight,
Mangled with ghastly wounds through plate and mail. – Book 68Milton, John. “Sixth Book: The Argument.” Paradise Lost. 1667. Sacred Texts. Web. Jul. 22, 2017.

In Friedrich Gottlieb Klopstock’s Der Messias (The Messiah), an epic poem influenced by Paradise Lost, Adramelech is “a spirit in guile and malice exceeding Satan” who both worked with Satan against God and aspired to overthrow Satan and take over his realm.

First appeared Adramelech, a spirit in guile and malice exceeding Satan, against whom his bosom still boiled with indignant rage, for being the first who attempted the apostacy, which he himself had long before projected. The actions he performed were not to advance Satan’s kingdom, but his own.

From years immemorial he had been considering how to raise himself to the dominion of hell ; how to engage the prince of the fiery deep in a fresh war against the Eternal : how to cause him to be for ever banished to the infinite space : or, if all failed, how he might subdue him by force of arms. 9Klopstock, Friedrich Gottlieb. The Messiah, Book II. Bungay : C. Brightly, 1808. 35-36. Internet Archive. Web. 22 Jul. 2017.

Mary Hanford Ford claimed the book was a favorite of the young Johann Wolfgang von Goethe, who took delight in the wild language between Satan and Adramelech and loved the scene where Satan and Adramelech plunged into the Dead Sea. He and his sister Cornelia, who always voiced the part of Adramelech, would recite their favorite scenes until their father caught them and forbade the book.10Ford, Marry Hanford Finney. Goethe’s Faust: Its Ethical Symbolism. Chicago : Alice B. Stockham & Co., 1897. 12-13. Google Books. Web. 22 Jul. 2017.

Adramelech in the Key of Solomon

French Occultist Eliphas Levi published a fragment of the Key of Solomon in his ‘Philosophie Occulte,’ Serie II that describes Adramelech as one of the demonic counterparts to the Kabbalistic Sefirot, corresponding with Hod or eternal order.

The eighth Number is eight. The eighth Sephira is Hod or eternal order. The Spirits of Hod are the Beni-Elohim or Sons of the Gods. Their empire is that of order; they correspond to the inner sense. They have for adversaries the Samael or jugglers, whose Chief is Adramelech.11Lévi, Eliphas. “Ancient Fragment of the Key of Solomon.” Philosophie Occulte,’ Serie II.. 1865. Sacred Texts. Web. Jul. 22, 2017.

Presbyterian minister Matthew Henry equates Adrammelech’s worship with peacocks and associates him with Moloch in his Complete Commentary on the Whole Bible (1706):

If we may credit the traditions of the Jewish doctors, they tell us that Succoth-Benoth was worshipped in a hen and chickens, Nergal in a cock, Ashima in a smooth goat, Nibhaz in a dog, Tartak in an ass, Adrammelech in a peacock, Anammelech in a pheasant. Our own tell us, more probably, that Succoth-Benoth (signifying the tents of the daughters) was Venus. Nergal, being worshipped by the Cuthites, or Persians, was the fire, Adrammelech and Anammelech were only distinctions of Moloch. – Commentary on 4 Kings (2 Kings) 17:3112Henry, Matthew. “4 Kings (2 Kings) Chapter 17.” Complete Commentary on the Whole Bible. 1706. Sacred Texts. Web. Jul. 22, 2017.

Presumably, this is the same tradition de Plancy references when he describes the demon as appearing in the shape of a peacock.