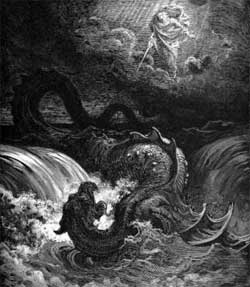 Leviathan was a large whale-like sea creature mentioned in the Bible.

The Apocryphal Book of Enoch gives the following description of this monster’s origins:

‘And that day will two monsters be parted, one monster, a female named Leviathan in order to dwell in the abyss of the ocean over the fountains of water; and (the other), a male called Behemoth, which holds his chest in an invisible desert whose name is Dundayin, east of the garden of Eden.’ – 1 Enoch 60:7-8

Leviathan was a large whale-like sea creature, who may have had 7 heads according to some legends. A lengthy description of him comes from the “Book of Job”:

‘His strong scales are his pride,
Shut up as with a tight seal.
One is so near to another
That no air can come between them.
They are joined one to another;
They clasp each other and cannot be separated.
His sneezes flash forth light,
And his eyes are like
the eyelids of the morning.
Out of his mouth go burning torches;
Sparks of fire leap forth.
Out of his nostrils smoke goes forth
As from a boiling pot and burning rushes.
His breath kindles coals,
And a flame goes forth from his mouth.
In his neck lodges strength,
And dismay leaps before him.
The folds of his flesh are joined together,
Firm on him and immovable.
His heart is as hard as a stone,
Even as hard as a lower millstone.
When he raises himself up, the mighty fear;
Because of the crashing they are bewildered.
The sword that reaches him cannot avail,
Nor the spear, the dart or the javelin.
He regards iron as straw, Bronze as rotten wood.
The arrow cannot make him flee;
Slingstones are turned into stubble for him.
Clubs are regarded as stubble;
He laughs at the rattling of the javelin.
His underparts are like sharp potsherds;
He spreads out like a threshing sledge on the mire.
He makes the depths boil like a pot;
He makes the sea like a jar of ointment.
Behind him he makes a wake to shine;
One would think the deep to be gray-haired.
Nothing on earth is like him,
One made without fear.
He looks on everything that is high;
He is king over all the sons of pride.’
– Job 41:15-32

Also, according to “Isaiah 27:1”, on the Day of Judgement the Lord will slay Leviathan:

‘In that day the Lord will punish,
With His great, cruel, mighty sword
Leviathan the Elusive Serpent–
Leviathan the Twisting Serpent
He will slay the Dragon of the sea.’

According to a passage in the T.B. “Baba Bathra” (75a), at the time of the resurrection, Gabriel will fight against Leviathan and overcome.

However, in “Psalms 74:26” God is praised as having crushed the heads of Leviathan:

‘it was You who crushed the heads of Leviathan, who left him as food for the denizens of the desert’

By ancient Tarsus held, or that sea-beast
Leviathan, which God of all his works
Created hugest that swim the ocean-stream.
-Paradise Lost i, 200-203

Wallowing unwieldy, enormous in their gait,
Tempest the ocean. There Leviathan,
Hugest of living creatures, on the deep
Stretched like a promontory, sleeps or swims,
And seems a moving land, and at his gills
Draws in, and at his trunk spouts out, a sea.
-Paradise Lost vii, 411-416

Leviatan: From Hebrew, LVIThN (usually written Leviathan instead of Leviatan), – the Crooked or Piercing Serpent or Dragon.