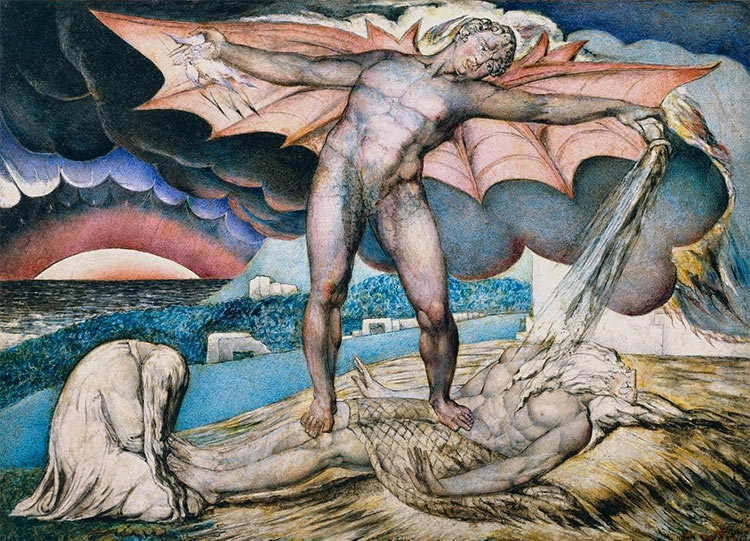 Satan and the Testament of Job

The Testament of Job, written sometime between 100 BC-100 AD, shows how Satan's role and character evolved from a servant of God to the spirit of idolatry and vengeance.

The Book of Job in the Hebrew bible was crafted to address human suffering and why bad things happen to good people. In it, Satan is a member of God’s divine court who walks the earth looking for sin and reports back to God. When God brags about what a loyal servant Job is, Satan responds that is only so because God has blessed him with wealth, children, and health. If he did not have such things, he would surely curse God. To prove this, God grants Satan permission to torment Job and soon, Satan has destroyed his riches, killed his children, and subjected him to nasty skin boils.

Despite his misfortunes and appeals from his family and friends that he should curse God, Job remains loyal to God but asks for an explanation – why is God (he never attributes his suffering to Satan) causing his innocent servant to suffer? When God replies, it’s not to justify His actions but to appeal to His omnipotence and power (basically God’s reason is because He can) – something that might not be convincing to us but Job is satisfied.

As biblical stories were passed from one generation to another, they were embellished upon. In Job’s case, an anonymous author penned an inspired Greek work called the Testament of Job sometime in the First Century BC- First Century AD.

Not content with God just allowing Satan to wreck havoc on Job’s life, in this book, Job (called Jobab before God named him Job) had been worshiping what he thought was a divine idol when he had a vision which revealed the idol was, in fact, a tool of Satan. Job immediately repented and asked God to grant him the authority to destroy the idol’s shrine. An angel of the Lord appeared before him to grant him permission but also warned him.

Thus says the Lord: If you attempt to purge the place of Satan, he will rise up against you with wrath for battle. But he will be unable to bring death upon you. He will bring on you many plagues, he will take away for himself your goods, he will carry off your children. But if you are patient, I will make your name renowned in all generations of the earth till the consummation of the age. And I will return you again to your goods. It will be repaid to you doubly, so you may know that the Lord is impartial – rendering good things to each one who obeys.

Notice how things have changed? Now, no longer is Job innocent of sin – he’s an idolater who has been worshiping Satan. Now, God isn’t telling Job he’s suffering because He is almighty and all powerful – Satan is the tormentor responsible for making Job’s life miserable. And now, God is promising that so long as Job withstands Satan’s attacks, God will richly reward him.

Sure enough, Job destroys the idol’s shrine and soon after, Satan comes knocking, literally. Rather than disguising himself as foreign attackers or natural disasters (winds, lightning) as in Job, he disguises himself as a beggar and asks Job for bread. Somehow, Job is able to see through Satan’s disguise and warns him that ‘You shall no longer eat from my loaves at all, for I have been estranged from you. Yet I have given you this loaf of bread in order that I may not be accused of providing nothing to a begging enemy.’ (7:10-11)

This enrages Satan, who asks God for permission to take Job’s wealth, his health and his children in a similar but more descriptive tale than in the Book of Job. Life gets so bad for Job that his wife must trade her own hair for 3 loaves of bread from the bread seller, who is Satan in disguise. Finally, after twenty years of sickness and poverty, Job and Satan have their final showdown where Satan admits defeat.

Look, Job, I am weary and I withdraw from you, even through you are flesh and I a spirit. You suffer a plague, but I am in deep distress. I became like one athlete wrestling another, and one pinned the other. The upper one silenced the lower one, by filling his mouth with sand and bruising his limbs. But because he showed endurance and did not grow weary, at the end the upper one cried out in defeat. So you also, Job, were the one below and in a plague, but you conquered my wrestling tactics which I brought on you.’

Even though Satan admits defeat, Job continues to remain in poor shape. Like in the Book of Job, his three friends and Elihu come to visit him and they engage in a series of dialogs, during which time, Job’s wife dies. Finally, God appears to Job to heal him and take him to heaven in a divine chariot.

The Roles of Satan and God

This book shows the confusion surrounding the role of Satan in the first centuries. Satan has clearly evolved from just a member of God’s divine court but the author doesn’t make it clear exactly what Satan’s relationship to God is. Satan in the spirit of idolatry but he cannot take vengeance on Job until God grants him permission. God foresees Satan will strike but doesn’t seem able (or willing) to prevent him. At first, Satan seeks revenge because Job destroyed his idol, but later, he wants to drive Job to rebel against God. And yet in the end, he seems to admire Job for resisting him and admits defeat. Finally, although Satan can cause sickness and poverty, only God can restore them.

Evil and Urizen: William Blake’s Visions of a Demiurge
Next Post: Two Accounts of Creation in Genesis