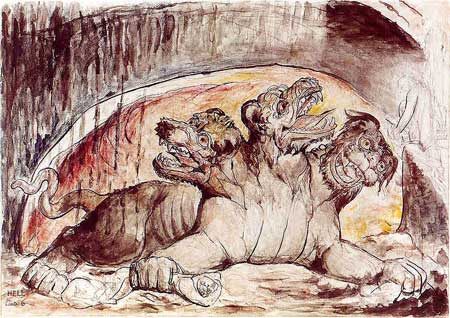 Cerberus was the three-headed watchdog with a serpent body that guarded the entrance to Hades in Greek/Roman mythology.

Cerberus was the three-headed watchdog with a serpent body that guarded the entrance to Hades in Greek/Roman mythology. He was the offspring of Typhon and Echidna. Hesiod describes him as

“Cerberus who eats raw meat, the hound of Hades with the voice of brass, fifty-headed, shameless and powerful” – Theogony 307

According to Homer, Hercules final task was to bring Cerberus up from the lower realms. Hercules descended into Hades accompanied by Mercury and Minerva. Pluto (Hades) granted him permission to take Cerberus provided he could do so without using weapons. Hercules encountered Cerberus near the gates of Acheron, one of the five rivers of the Underworld. Using only his strength, he wrestled Cerberus & was able to take him up to Eurystheus. As he struggled, his saliva dripped to the ground producing a poisonous plant called aconite (also known as ‘hecateis,’ because Hecate was the first to use it). It was also what Medea used to try to poison Theseus.

Besides Hercules, Orpheus was the only other person to attempt to go up against Cerberus. During his descent into Hades to bring his wife, Eurydice, back from the dead. In his journey, he soothed Cerberus to sleep with his lyre.

Virgil writes another account of Cerberus in the Aeneid when Aeneas accompanied by the Sibyl, the prophetess of Apollo, descended to the underworld to visit his father Anchises

“Grim Cerberus, who soon began to rear
His crested snakes, and arm’d his bristling hair.
The prudent Sibyl had before prepar’d
A sop, in honey steep’d, to charm the guard;
Which, mix’d with pow’rful drugs, she cast before
His greedy grinning jaws, just op’d to roar.
With three enormous mouths he gapes; and straight,
With hunger press’d, devours the pleasing bait.
Long draughts of sleep his monstrous limbs enslave;
He reels, and, falling, fills the spacious cave.
The keeper charm’d, the chief without delay
Pass’d on, and took th’ irremeable way.”
– Aeneid VI

Dante wrote in the Inferno (1307-1308 CE) that Cerberus tormented the souls of the Third Circle of Hell, where the gluttonous reside.

“Over the souls of those submerged beneath
That mess, is an outlandish, vicious beast,
His three throats barking, doglike: Cerberus.
His eyes are bloodred; greasy, black, his beard;
His belly bulges, and his hands are claws;
His talons tear and flay and render the shades.”
– Dante’s Inferno VI 13-18