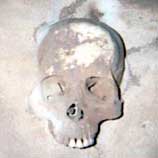 Appeasing the Rain God In Belize: A Mayan Journey into Xibalba

A few years ago, I was fortunate enough to tour Actun Tunichil Muknal, a Mayan cave discovered in 1989 in Cayo, Belize. Our tour guide likened the venture into the cave as the hero twins' journey into Xibalba as recounted in the Popul Voh.

A few years ago, I was fortunate enough to tour Actun Tunichil Muknal, a Mayan cave discovered in 1989 in Cayo, Belize. We were lucky enough to join a guided tour (the site is only accessible through licensed guides) and made our way into the depths of the cave.

Our tour guide likened the venture into the cave as the hero twins’ journey into Xibalba as recounted in the Popul Voh. You’ve probably seen pictures of some of the great Mayan sites like Tikal and Chichen Itza. The Mayans built these elaborate temples to meet the sky and interact with the 13 levels of heaven, but they also felt it was important to appease the underworld gods as well – there had to be a balance. Just as they made sacrifices above ground, they also used caves to sacrifice below. 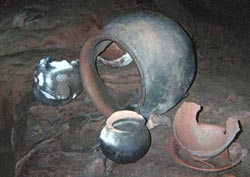 In Mayan mythology, gods weren’t good or evil. Instead, they encompassed all aspects. Actun Tunichil Muknal was thought to be dedicated to the Rain God, Chac, who could be generous and provide abundant rain for good crops or could be destructive by bringing forth drought or hurricane rains.

The Mayans set up several altars within the cave’s main chamber. We had to remove our shoes for fear we might step on and break something. Everywhere you looked, there were altars set up consisting of a pot resting on three stones. Presumably, a fire was lit underneath. When the sacrifice was finished, the Mayans would carve a small circle in the pot or smash it completely to release the spirits contained in the items. 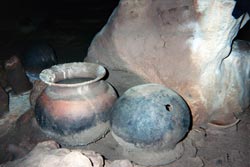 In the entire cave, only one pot had not been “killed.” It lay beside the skeletal remains of a newborn so young that its cranium had not yet fused together. Our guide thought that the baby was probably sacrificed in a purity ritual and the pot was thought to have caught the water which dripped from the stalactites, which were thought to be the roots of the sacred Ceiba tree.

The entire path we walked contained altars, as the Mayans didn’t reuse altars once the ritual was finished. Though they’d “kill” the pots to release the spirits, they considered the altar to remain sacred and therefore unusable. In total, excavators found fourteen skeletons in the cave – we saw five of them. 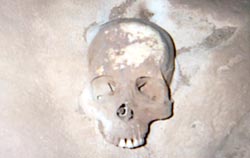 Pain was a big part of Mayan ritual. The Mayans would bind prisoners with their hands tied behind their backs and their fingers cut off so they couldn’t undo the binding. They would also cut out their tongue and possibly break limb bones before slowly disemboweling their victims to maximize their pain. 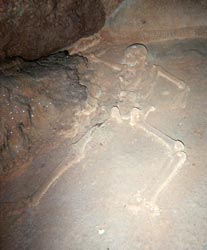 This last picture is of a girl who is thought to have just reached puberty. There’s been much speculation about her position. Some archaeologists believe she was laid out in a dancer position while others believe that the natural flow of water through the cave pushed her legs apart.

To many, the very act of sacrificing humans would be considered “evil,” especially so because Mayans tortured their sacrifices and made sure their deaths were slow and painful. The Mayans performed their sacrifices out of their desire to find favor with and please their gods. In a previous article, I discussed the concept of evil intentions and how in our culture, hurricanes and other natural events are not considered evil or intentional, yet for the Mayans, these acts were deliberate acts of the gods to punish them.

Seraphim
Next Post: Night Battles: How the Benandanti Fought Witches During the Sabbath